Equality of opportunity for everyone is essential for businesses to thrive. For 2019 International Woman’s Day, Carla White shares what #balanceforbetter means to her. 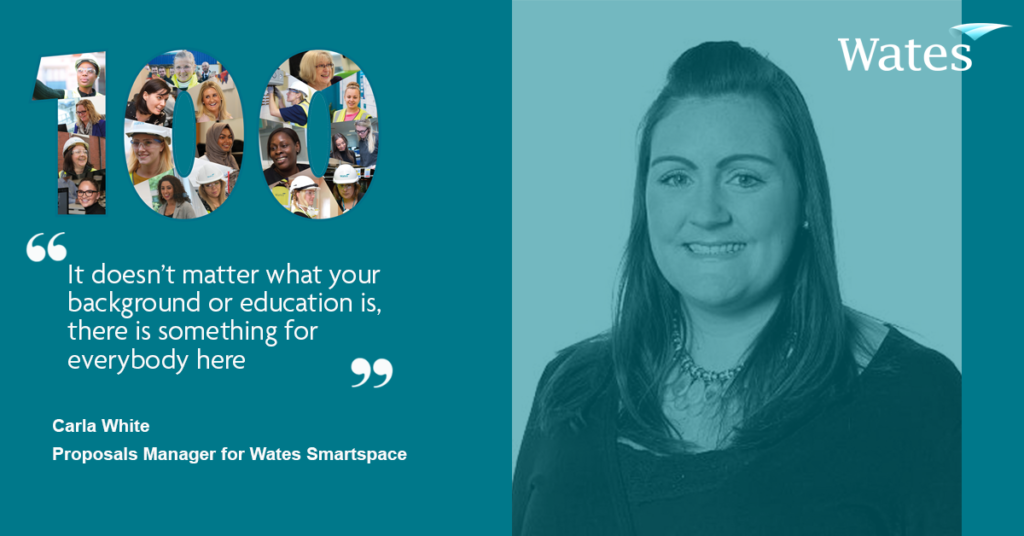 Introduce yourself for us

How long have you been in your current role?

I have been at Wates for 15 years initially with Living Space, then Residential and then the last nine months in Smartspace! I have been a Proposals Manager for eight years and worked in bidding for the last 11 years.

What brought you to Wates?

I was only meant to be here for six weeks and 15 years later they still can’t get rid of me! I literally fell into construction coming here as a temporary worker at a site office and then working my way up.

What advice would you give to women entering the industry?

It doesn’t matter what your background or education is, there is something for everybody here. I never would have thought I would have ended up with a career in construction after completing degrees in languages and linguistics. I love that everyone is from different disciplines, it gives new perspectives to old problems.

Who are your role models?

I am lucky to have met some wonderful people here at Wates and have many role models both male and female. I thank those that saw a little spark in me and allowed me to develop my career here (you know who you are and you can fight amongst yourselves for who I mean) .

I also admire the Kardashians. Despite what people may think of their often shameless social media self-exposure, they are shrewd businesswomen. They have built up their empire trading on their name, have a plethora of successful business ventures and not a man in sight propping all this up. This often gets overlooked in lieu of what they are wearing and what surgery they have had this week – quite frustrating. They are after all, self-made women.

Tell us something unusual about you

I can speak eight languages, I am a terrible pedant, I have the incredible knack to fall over fresh air (like Bambi on ice)…

What changes would you like to see in 100 years’ time?

That women are not judged on appearance alone – did the press ever judge male prime ministers on their suits and shoes? That the word ‘feisty’ becomes gender neutral. I mean, it isn’t the best adjective which is a derivative from German and refers to a small aggressive dog! – but, I hate that it is always associated with women. Have you ever heard a man being called feisty?

That women truly empower each other to succeed and don’t feel that they have to ‘act more man’ to get there.