BLOG: Supporting the BBC’s ‘Make a Difference’ campaign in Birmingham

For our project teams working on sites big and small across the country, the increasing number of people fighting poverty has been all too visible.

While this is clearly evidenced by a rise in the number of homeless people we see on our streets, less noticeable to the casual observer will be the increasing number of people visiting food banks because they are unable to feed themselves and their families. The steady rise in the number of foodbanks across the country in recent years is a reflection of the state of affairs for 21st century Britain.

Figures from the Trussell Trust show that close to 33,500 people in Birmingham needed assistance from foodbanks between April 2017 and March this year. Remarkably, this is a 2.5 per cent increase on the previous twelve months, proving this to be an injustice that shows no sign of abating.

Which is why we at Wates Construction and Wates Living Space have thrown our full support behind the BBC WM Make a Difference campaign – designed to shine a spotlight on the rise of food poverty in the West Midlands while also offering help and support for those that are trying to arrest this most worrying of trends.

However, amidst the anger at the rise of foodbank use in our country, we can also find hope and inspiration. There can be surely no better example of this than Syd, an 89 year old volunteer at Narthex Sparkhill Foodbank in Tyseley who is fulfilling his late wife’s dying wish that he help those in need in Birmingham. Syd and his fellow volunteers give up their own time to help support fellow members of the community in crisis. Understandably, the main focus at Sparkhill is on what can be done to improve the lives of those who visit, but what about improving the working conditions of those who selflessly volunteer?

That’s where we come in. Wates has a large presence in Birmingham, with an office in Quinton and project teams currently building Left Bank residential development on Broad Street and delivering Europe’s largest social housing repairs and maintenance contract for the City Council. On each project we complete, we put something back into the local community and address the causes that matter most to that region. When we heard about BBC West Midlands’ Make a Difference campaign, our project teams were determined to get involved and offer our support to Sparkhill’s staff and users.

We have recently experienced the worst winter in recent years, and our team is in awe of the Sparkhill volunteers who braved sub-zero conditions to prepare food packages in a cold warehouse on the Rovex Business park. However, we believe that the volunteers deserve surroundings befitting their selflessness and so we were honoured to build them a new fully heated distribution unit.

We called on our local supply chain to help us and while we know that we work with some of the best subcontractors in the West Midlands, we were overwhelmed by their support and generosity. CS Manfield erected the unit’s frame, with timber donated by Craylon Ltd. The boards for the new distribution centre were provided free of charge by ISEC Interior Systems Ltd from Stafford, while the windows were donated by Oldbury based Beacon Trade and Tool. The doors were supplied by Midland Building Product, while ironmongery came from Tuscan – both were installed, free of charge, by Craylon ltd. Paint for the new unit was donated by Sutton Coldfield’s MJS Decorators. Top Quality cleaners also supported us in cleaning on the final day.

All of our supply chain that helped build this unit are deserving of huge praise for their generosity and enthusiasm, but I’d also like to offer special thanks to electricians Barrie Beard Ltd from Bromsgrove, who donated a full kitchen unit.

Finally, thanks must go to Wates Giving, our charitable programme run by the Wates Family Enterprise Trust, for contributing funds to support our efforts. 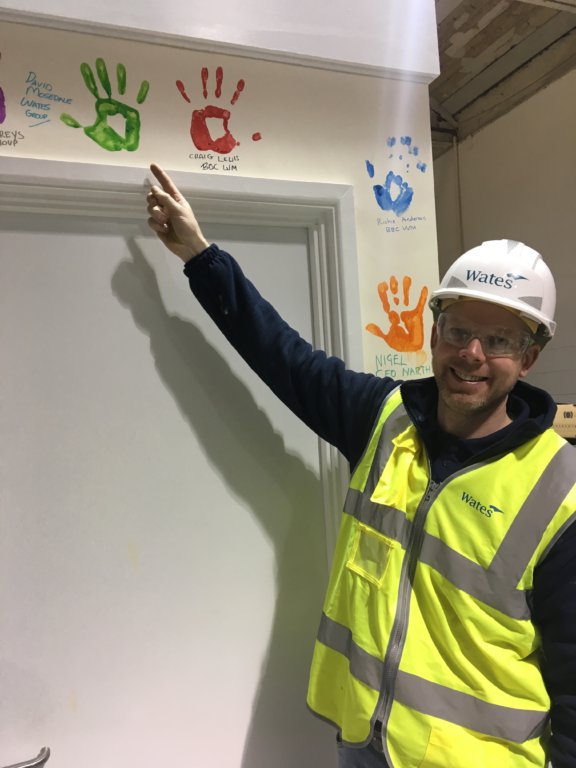 It was a pleasure to attend the grand opening of the food distribution unit on Friday 27th April with my colleagues who have been vital to this process, Thomas Anderson, Scott Macnamara, Mark Jones, and Lisa Cunningham along with our temporary works team. We were also joined by our fellow colleagues from the Living Space team who have also proved invaluable: Tom Maloney, Ian Bowles, Tony Kinsella, Mark Haycock, Ross Trappett, Akeel Rahman, Tom Humphries, Dennis Painter, Ronda D’Aguila.

The people who work at foodbanks are heroes though we all hope that in the cold winters to come that the need for organisations such as Sparkhill recedes. Until then, Wates will do what we can to support the exceptional work they do, and we’d like to encourage our colleagues in the private sector to also support these vital groups.

BLOG: Buy local and buy social - an investment contractors can make in society

BLOG: Trading with organisations that support local communities can make a difference

BLOG: Giving back is what gives me pride in my work

Each year Wates holds Reshaping Tomorrow Week (11-15 June), a unique volunteering event that sees the business’ 4,000 employees donate their time to support the communities in which they live and work.

BLOG: Your skills are most valuable when used as a force for good.

Reshaping Tomorrow Week reminds us how important it is to work together and the amazing things that can be achieved when we do.

BLOG: Buying local isn't about business - it's about people

To find the right fit for our projects, Wates takes into account specialist skills, services or materials needed and appointing contracts as locally as possible.

BLOG: Taking social value to the next level

Christian Bailey considers the case for taking social value to the next level and how Wates has explored ways in which to unlock greater local benefit via the NWCH Frameworks.

Clare Gill discusses how the training and employment landscape is evolving and the comprehensive efforts through which Wates aims to help people get into work.

BLOG: The time is right for social enterprises to make a splash in UK construction

Josh Steiner from Wates Construction, looks at how small social enterprises can capitalise on business growth opportunities currently present in the construction sector.

BLOG: Inspiring the next generation of East Midlands workers

At Wates, we were involved in a range of events over the summer designed to help young people in the East Midlands develop an awareness of the world of work and take their next steps towards a construction career.

BLOG: Why it pays to buy social

Rachel Woolliscroft discusses the business merits on investing in social enterprise as part of your supply chain.

BLOG: The Next Generation Workforce Must Value Social Enterprises

Understanding the importance of social enterprises is vital for young people joining the construction industry, according to Zak Farnsworth, a commercial management trainee in Nottingham.